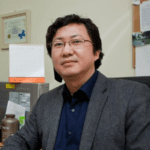 Prof. Dong-ki Lee received B. S. in Chemistry from Korea Advanced Institute of Science and Technology (KAIST) in 1993, and Ph. D. in Biochemistry from Cornell University in 1999. After post-doctoral training in Pohang University of Science and Technology (POSTECH), Toolgen Inc., and KAIST, he joined POSTECH as an assistant professor in 2004. In 2008, He moved to Sungkyunkwan University and is a full professor of Chemistry since 2012. In 2008, Prof. Lee was selected as the principal investigator of the Global Research Laboratory program, funded by Korean government, to develop novel RNAi medicine. He is currently serving as the Asian editor of “Nucleic Acid Therapeutics” and a editorial board member of “Molecular Therapy: Nucleic Acids”. His work on novel siRNA structures, nucleic acid aptamers, and eukaryotic gene regulation has been published as over 80 papers including prestigious journals such as Nature, Cell, PNAS, and Molecular Therapy. In 2010, he founded OliX Pharmaceuticals, a publicly traded RNAi therapeutics company, and serves as Chief Executive Officer.