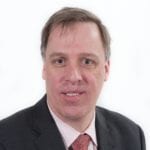 Dr. Antonin (Tony) de Fougerolles joined Evox Therapeutics as CEO in late 2017 and oversees the management of the company. Evox is engineering exosomes, the body’s natural delivery system, to enable a wide variety of drugs to reach previously inaccessible tissues and compartments, such as crossing the blood brain barrier to deliver drugs to the CNS, intracellular delivery of biologics, and extra-hepatic delivery of RNA therapeutics.

Tony has over 20 years of biotech R&D experience in building out drug pipelines, and he has played a key role in developing and advancing 3 new drug modalities towards the market (RNAi, modified mRNA, single domain antibodies). Prior to joining Evox, Tony was CSO of Ablynx, where he led the company’s non-clinical R&D operations, including Discovery, Pharmacology, CMC, and Clinical Trial Supply. Prior to Ablynx, Tony held several posts including founding CSO at Moderna Therapeutics, CSO at Tolerx, and VP Research at Alnylam Pharmaceuticals. In addition, Tony has been Principal Investigator on over $80M in grants, has over 60 scientific publications, and is an inventor on over 90 issued U.S. patents. He earned his Ph.D. in Immunology from Harvard University.